Here are my thoughts on the book.

Theme:
Page 45: “Beneath those photos were five more that Grandpa Portman had never shown me. I wondered why, until I looked closer. Three were so obviously manipulated that even a kid would see through them: one was a laughable double exposure of a girl “trapped” in a bottle; another showed a “levitating” girl, suspended by something hidden in the dark doorway behind her; the third was a dog with a boy’s face pasted crudely onto it. As if these weren’t bizarre enough, the last two were like something out of David Lynch’s nightmares: one was an unhappy young contortionist doing a frightening backbend; in the other a pair of freakish twins were dressed in the weirdest costumes I’d ever seen. Even my grandfather, who’d filled my head with stories of tentacle-tongued monsters, ad realized images like these would give any kid bad dreams”.

This paragraph is important in the book because it introduces the reader to the theme. The pictures are the red thread through the whole history, and this is where Jacob finds them. This starts the whole story. The pictures are the reason for the story, and in this particular paragraph is where Jacob starts wondering what if his grandpa’s stories actually are true. He always thought they were pure fantasy, but these photos make him think twice. He has to decide whether he should trust his grandpa’s stories, or just forget about them.

Setting:
Page 79: “My grandfather had described it a hundred times, but in his stories the house was always a bright, happy place – big and rambling, yes, but full of light and laughter. What stood before me now was no refuge from monsters but a monster itself, staring down from its perch on the hill with vacant hunger”.

This paragraph describes the setting of the old house on the island in Wales, where most of Grandpa Portman’s stories take place. It describes both how the house was for Grandpa Porter, and what Jacob sees today. The house, the setting has two sides, the happy place in the loop where the kids found refuge, and the sad, scary abandoned house. There is a dark side of the story, with monsters, and a happy side of the story, where Jacob finds friends and happy times.

Plot:
Page 243: “He could see the monsters. The moment she said it, all the horrors I thought I’d put behind me came flooding back. They were real. They were real and they’d killed my grandfather.
“I can see them too,” I told her, whispering it like a secret shame.
Her eyes welled and she embraced me. “I knew there was something peculiar about you,” she said. “And I mean that as the highest compliment.””

This paragraph describes the plot very well. The most important part of the plot is the fact that Grandpa Portman’s stories are real, all the monsters are real, everything that Grandpa Portman ever had said was real. The peculiar children exist, and Jacob, who has always been a bit different, proves be one of them.  This is what the whole book is built on, and when Jacob knows that both the monsters and the peculiars the plot starts building up.

Character development:
Page 302-303: “So I squeezed my eyes shut, because I didn’t want its gaping jaws to be the last thing I’d ever see, and gripped the shears in front of me with both hands. Time seemed to stretch out, like they say it does in car crashes and train accidents and free-falls from airplanes, and the nest thing I felt was a bone-jarring collision as I slammed into the hollow.
(…)
I killed it, I thought. I really killed it. All the time I’d spent being afraid, I never dreamed that I could actually kill one!”

In this paragraph, Jacob realizes how much he has changed from meeting the peculiar children. He has grown to trust himself, and his grandpa’s stories. He has gone from being a scared, careful boy, to actually killing the monster, and saving both his life and many others. We get to know Jacob closer and closer, and during the book he discovers more and more about himself.
Posted by Karoline at 11:55 PM 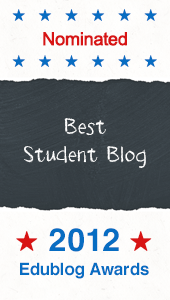